Forests and forestry mean a lot to Sweden’s society and economy. The forest industry cycle also contributes to reducing carbon dioxide emissions, for the sake of the climate.

The forest industry enables us to build wooden houses, decorate these houses with wooden furniture and buying milk in cartons produced from wood pulp. All these products contribute to great societal benefit and facilitate everyday life. In addition, they often replace products made from less climate-friendly materials.

37% of Sweden’s energy use comes from bioenergy

A key to Sweden’s low emissions compared to many other countries is that more than a third of our total energy use consists of bioenergy. A large proportion of Swedish homes and commercial premises are heated by bioenergy, unlike in Germany and the Netherlands, for example, where natural gas is used.

The bioenergy used in Sweden in large parts come from forestry waste, wood and pulp industry waste, as well as used fiber and recycled wood.

Just over 7 million hectares of Swedish forest is exempt from production. This corresponds to 26 percent of all forest land in Sweden. There are different types of protection. Firstly, the formal protection in the form of national parks, nature reserves and other types of formal protection instruments. Secondly, the informal protection, which consists of the forest owners’ own voluntary protections of forest. It is often part of the certification systems for forest, PEFC and FSC. Finally, there is unproductive forest that has low growth, that nevertheless can have important natural values. All felling in such areas is prohibited by law. In total, it looks like this:

Read more about the protection of Swedish forests. 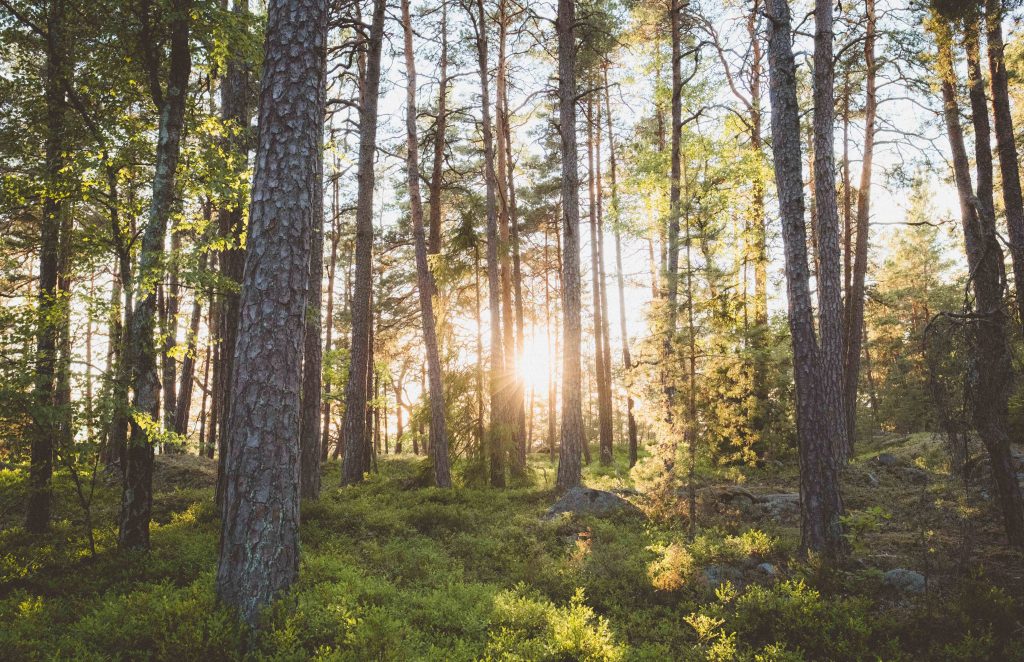 As many as 313,000 Swedes own forest, and about half of all forest in the country is owned by individuals. The fact that forest ownership is so widespread means that there is a great diversity in forestry, which also leads to greater variation in our forests.

Approximately 115,000 Swedes are employed by the forest industry in the long chain from planting to finished product. There is an entire ecosystem of subcontractors around the forestry industry, which is especially important in the parts of the country where forestry is greatest. The annual export value of forest products is approximately SEK 145 billion, or just under 14 billion euros.

But what effect does this have on the forest itself? The Swedish forest industry is built up in a cycle from planting to rejuvenation felling and finished products. As many as 380 million new tree plants are planted every year. This means that a felled tree is replaced with almost three new plants.

Sweden has more forest than in a very long time

The forest industry also saves the equivalent of 1 in 5 trees during felling, which means that the Swedish forest continues to grow larger. Today it is about twice as big as it was in the first half of the 20th century. Despite this, the forest industry’s production and use of bioenergy is greater than ever. Well-managed forests both grow faster and absorb more carbon dioxide.

This is the cycle of the Swedish forest industry.

This website uses cookies to improve your experience while you navigate through the website. Out of these, the cookies that are categorized as necessary are stored on your browser as they are essential for the working of basic functionalities of the website. We also use third-party cookies that help us analyze and understand how you use this website. These cookies will be stored in your browser only with your consent. You also have the option to opt-out of these cookies. But opting out of some of these cookies may affect your browsing experience.
Necessary Alltid aktiverad
Necessary cookies are absolutely essential for the website to function properly. These cookies ensure basic functionalities and security features of the website, anonymously.
Functional
Functional cookies help to perform certain functionalities like sharing the content of the website on social media platforms, collect feedbacks, and other third-party features.
Performance
Performance cookies are used to understand and analyze the key performance indexes of the website which helps in delivering a better user experience for the visitors.
Analytics
Analytical cookies are used to understand how visitors interact with the website. These cookies help provide information on metrics the number of visitors, bounce rate, traffic source, etc.
Advertisement
Advertisement cookies are used to provide visitors with relevant ads and marketing campaigns. These cookies track visitors across websites and collect information to provide customized ads.
Others
Other uncategorized cookies are those that are being analyzed and have not been classified into a category as yet.
SPARA OCH ACCEPTERA